This photo shows how highway 1 hugs much of the Californian coast.

The wonderful thing about the coast road is that throughout the day the environment is changing. In the morning there was lots of fog, as the day warmed up it burnt off. There was also plenty of sea mist.

These conditions provided for some pretty amazing perspectives. 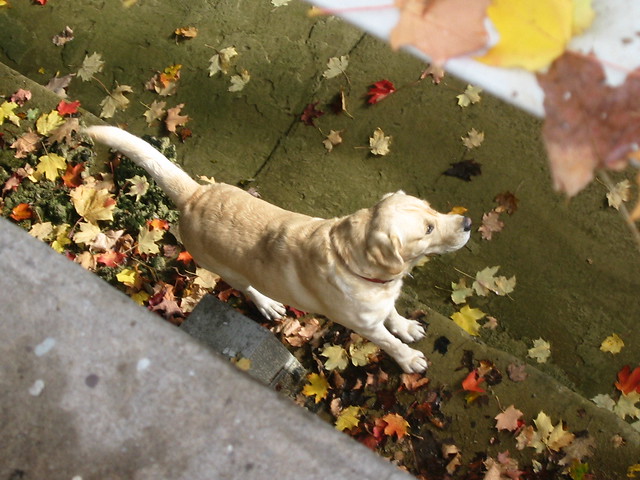 Peterborough lift lock is the tallest in the world, or so I remember. The fall colours were beautiful. This dog was below the lift lock and belonged to workers at the lock.

Ontatio had the most spectacular colours during our Fall trip. 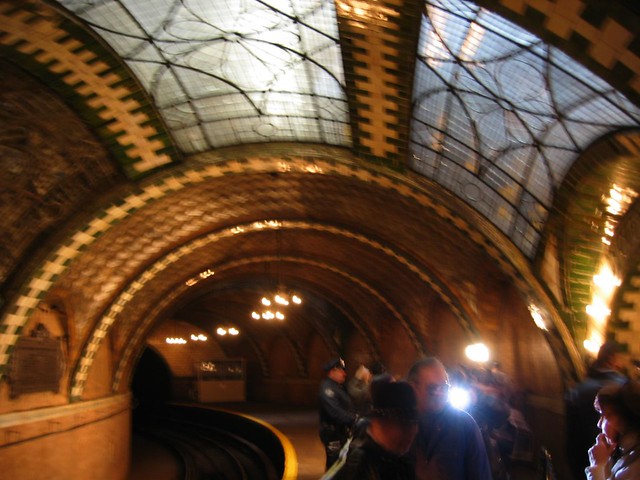 You may have read previously that I was quoted in the Columbia Uni Rag that I was surprised that the cell phone worked, or something similar. The reality of course is that this trainee journalist was demonstrating has ability to get the facts wrong attributed.

1) No Australian carries a cell phone – we have Mobile Phones

2) I certainly didn’t take mine on holiday.

I do appreciate that there is documentary evidence, from an independent source that I was indeed in City Hall station on the occassion of the Subway’s 100th Birthday. 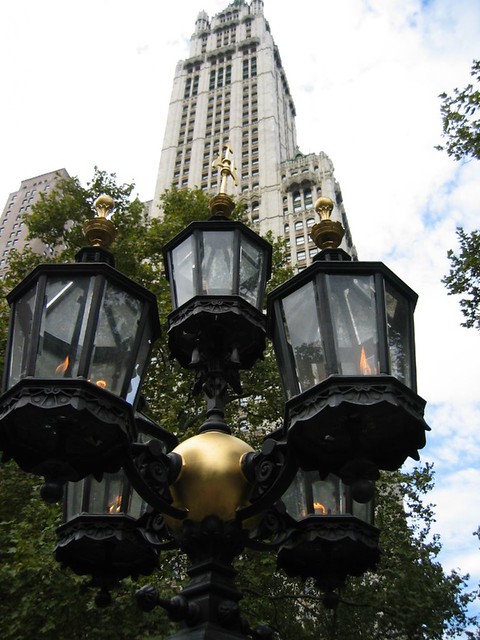 Well it has taken us some time to work with our photos. Our first attempt are some West Coast Panoramas.

I never had a cell phone.

As you may have already noticed we are back in Adelaide. It is certainly good to see the green on Adelaide’s hills and to see an overgrown garden in its spring prime!

Since I last wrote, we continued our Bollywood theme for 2004 by seeing the Broadyway/Eastend musical Bombay Dreams which was full of Bollywood Glitz. The only thing missing was the final hour. I don’t know these Broadway Singers tire too easily.

We’ve got the Soundtrack for anyone who wants to listen to Bollywood inspired songs in Engish. It was quite unusual to be able to actually understand the songs. Many first release films don’t have subtitles for the songs. The live Indian music certainly got the audience going.

On the last day, in supreme gunzel style, celebrated the 100th aniversary of the New York Subway by visiting the NY Transit Museum in Brooklyn and had a guided tour for free! It was a buzz. We also saw the beautiful City Hall station which is normally closed to the publice. If we had one more day, we would have been able to catch the Historic Subway cars operating throughout the system. Still, there is nothing like a NY Express Train!

To prove my credentials, we arrived in NY by train from Newark and departed via JFK also by subway! Lugging more than 35 kilos up and down subway steps is certainly a bigger work out than what I usually get.

We landed in San Diego and this time did not rely on a train to transport us and our luggage to the hotel. We used an airport shuttle (read bus on a ford truck chassis). We stayed at Pacific Beach, a beautiful surf beach where we could hear the waves lapping the shore all night long. It was a great place to calm down after the extreme bustle of New York.

We spent quite some time just walking or cycling the “boardwalk” *actually a concrete bath, with plenty of other cyclists, roller bladers and walkers.

In San Diego we caught public transport to Mexico, walked across the border and got accosted by many Mexicans selling all sorts of goods. I certainly enjoyed their good humour, even the guy who chased after me to remind me that I had promised to visit his restraunt on the way back to the US!! It is amazing how much difference there can be in a matter of 100s of metres. While the main drag caters for US tourists the side streets seem more authentic, as a sampler it certainly made me want to come back to Mexico and other parts of South America for more.

San Diego, especially represented by Pacific and Mission beaches, is a relaxed town and reminded me a lot of home. But their modern trolley continues to be extended and is well utilised perhaps Adelaide can learn from San Diego and Portland?

We caught the Amtrak Pacific Surfliner from San Diego to LAX (which is actually Union Station not the Airport). We congratulated ourselves on purchasing Business Class tickets to LAX, because this guaranteed a seat. From what we could gather the from the announcements in cattle class, the train had anywhere upto 300 standing passengers, and this ain’t a 5 minute ride, some would have standed for more than 2 hours! Quality Amtrak rail services eh?

Union Station is quite beautiful, we stayed across the road and enjoyed great mexican food at El Pueblo/Olvera Street certainly better than the franchised restaurant and any Mexican I’ve had here. We visited Universal City for the complete LA experience and drove down Sunset Boulevard on Halloween Night, their were plent of Adult tick or treaters ready for the big street party!

Well, I hope you have enjoyed reading this blog. Keep your eye out as we will be posting some of the better photographs here soon.

When you go to an airport, the experiences you have are relatively the same around the world. Or so you would think.

When we left Adelaide to go to USA/Canada we give them our checked luggage and passports. They ask routine questions “Why are you going there..”. Then you have the luggage tags placed on your bag and they get taken away on a conveyour belt, and you are handed your boarding tickets. You hope that you will see your luggage again in the airport of your chosen country once the journey is over. Seems like a simple process doesn’t it. We’ll this is not the LAX experience (X has to be for the experience).

After a long day in LA we arrived at the departures section of LAX. It was very busy and hard to walk through the crowd. Regular picture – dark airport lots of people lots of luggage – and not just your normal suitcase size either. So far so normal.

We located the Qantas check-in desk, stuck our luggage on the scales (weph!), and handed in our passports. Our carry on luggage (Kym’s I might add) was weighed – apparently we had too much in there… out came a few pairs of jeans and a couple of books. These were promptly placed in a library bag (see they are so useful – always have one with you!). After having the bag tags stuck on the checked luggage, we were told that we had to take our luggage and join the queue (approx 300m in length – I am bad at approximations) for the checked luggage to be scanned. We waited in this queue with all of our luggage for over an hour!! Once we got to the front you give your bag to a person who places onto small luggage cart, who then hands it to someone else who takes it to one end of the x-ray machine and dumps it on the belt that takes it through the machine. After scanning it is hurtled out of the machine, a bloke picks it up and places it on another small luggage cart. While this is all going on you are standing behind a line wanting until your bag comes through. When the bloke looks in your general direction you hold up one finger to indicate you only have one bag, then they wave you off.

At this point you would think that it gets put on electric belt so they don’t have to push them through the building. Wrong! A number of cases are placed on top of each other on a small cart then it is wheeled (here is the strange part), next to the long line of people waiting to have this same experience, through the departures section to behind a desk. From this point on its journey is a mystery becuase I don’t want to see that luggage until we land in Melbourne!

Hang on – there is more. After this experience you then join another long line of all the people with their hand luggage to go through the screening so you can wait at the gate. This took 30 minutes (we weren’t even frisked, or had bags searched or had photos and fingerprints taken). By the time we got through this process the boarding time had already arrived.

But wait – there is more! We were then told that boarding had been delayed becuase the bus that the crew were on to bring them to the airport had blown a tire on the freeway, and we would be delayed about 45 minutes waiting for another pick-up. I later found out that the bus driver of that bus wanted to keep going to the airport – but they convinced him to stop. Eventually we did get on the plane and safely home.

One piece of advice for anyone use LAX – don’t. If you have the option leave from somewhere else. The experience just isn’t worth the cost.

Wow – believe it or not on the tourist map there is a “Library Circle” listed. We thought – wow a library that is actually listed on the map. Okay we walked there… guess what… it won’t be there until 2007!!!

I must admit that after visiting the currently library, I can see why! They definately need a new library. The Library looked like it was built in the late 60’s – 70’s and nothng had changed. They still had all the wooden shelves – heaven forbid if they have a fire.

They had a separate area for different sections (fiction, literature, reference, childrens, AV, etc). On entry there were two desks – checkin and out then you walked another 5 paces and you had a security desk (thank-god we don’t need these permanently!!), and on the opposite side an information desk – staff by two people. I think I counted at least 12 staff within the first 10 paces of the library. Further on was a stack request desk, and another desk in each sections staffed by at least 2-4 people. I would love to know their stats.

However, on the Library Bag front, I have failed again. No Library Bag for sale. The friendly person at the information desk did tell in that in their new library they will have a store and will sell library related type products.

I must admit after visiting all the library stores (or lack of them) I certainly have an idea about what they should and shouldn’t stock.

Nearly home – and we are out of towns and libraries. Currently in LA.

Ahhhhhh, New York is so invigorating espescially after rural PEI.

We’re at EasyInternet in Time Square, I am hoping to pick up some tickets to a broadway production tonight! Hopefully they will be at the cheap booth.

We were also here last night, sometimes you wonder whether it is brighter during the night than it is during the day. You would also be pleased to know that Fox is using one of the giant display panels as a COUNTDOWN to the next series of the OC.

We saw Team America last night, South Park with wooden puppets a la Thunderbirds. It is really funny to see “models” of a place where you are seeing the film in the film.

We’ve been cheap and caught the Staten Island FREE! ferry and I’ve bought a new tie wardrobe from the Zagat Rate #1 Discount Stor in New York.

It is complete gunzel time in New York they are celebrating the 100 years of the Subway.