This is a coffee you have when you are waiting for a train.  The train leaves at 11:44pm…. so sitting in the foyer of the hotel we stayed in requires us to have something, so coffee it was. 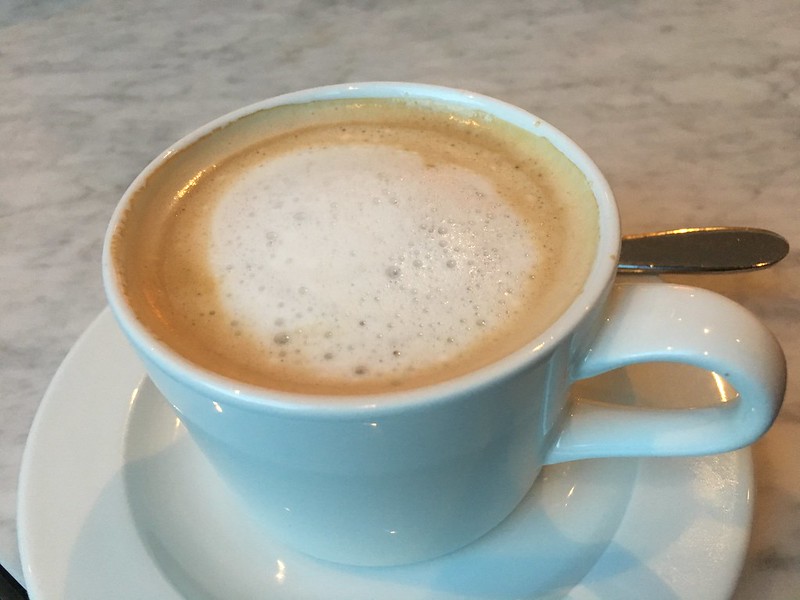 Strangely enough their is a track playing which combines the A-ha hit from the 80s ‘take on me’ and ‘happy’ by Pharell Williams… bizarre.  Only a couple of hours to go!

There is no chance of any correct pronunciations.  My limited knowledge of the language will enable me to say thank-you, and please. 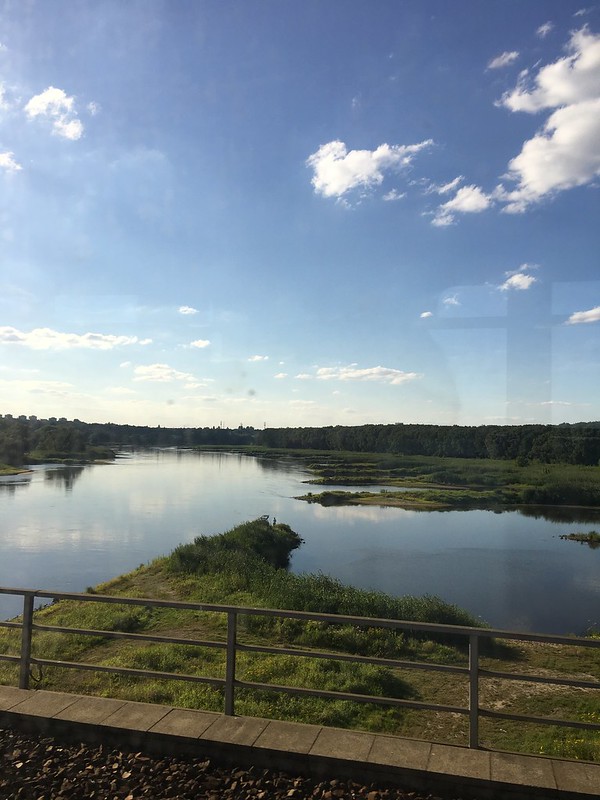 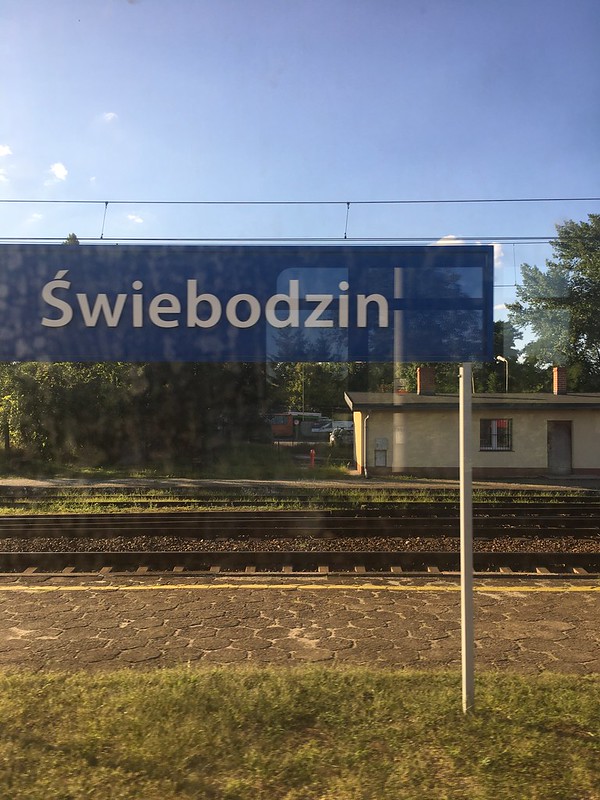 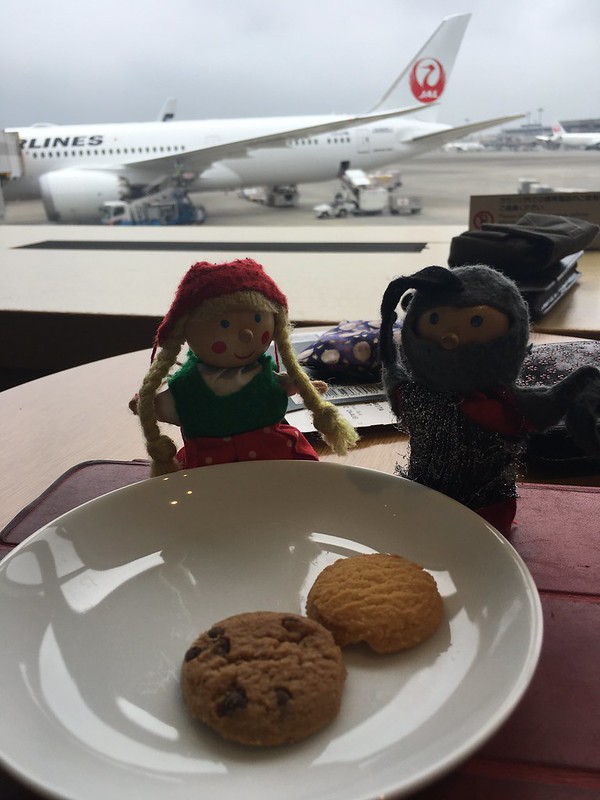 Other side of the pond!

Yes… It’s time to move already. It didn’t just rain yesterday… It poured, pretty much all day, so in the end we were thankful we weren’t standing out in the weather for the match. Instead we visited a market… Found excellent coffee (was there any doubt we wouldn’t?), did a tour of the Teatre Colon, saw some tango, and watched the soccer match on TV.

All in all… It was a good day.

Our Wednesday was longer due to flying across the international date line. The flight was okay… uneventful – just the way I like it.

Watched a few movies: Chef, Still life, The normal heart, and VEEP (b grade american humour, but enjoyable given the location). There was a bit of turbulence a few hours in during the meal service.

Flying over so , much sea it is a delight to see land. But when you finally see the continent… The mountains are really something to behold. Coming into land in Santiago was amazing from the perspective of seeing the mountains appear… and then, go on, and on, and on. It was truly a beautiful sight – no picture can do it justice.

We spent three hours in the airport in Santiago. While the chairs were uncomfortable, there was a haze surrounding the airport, which was unfortunate as your could just see the outline of mountains hugging the area. The flight from Santiago to Buenos Aires was incredible – just for the views of flying over the Andes. We were on a Boeing 787 (Dreamliner- new), which was quite spacious for a plane, with a lot storage overhead. Once you take off the plan begins it climb up and turns to head over the Andes. Quite soon everyone is required to be in their seat for potential turbulence. The plane climbs to 41,000 feet, and the views are amazing. Unfortunately no photos were taken due to the proximity of both of us and the photo devices, the view of the snow capped mountains seem to go on and on, and are a marvel to behold. You are just going to have to wait until the bus ride – something to look forward too, sort-of.

One flight down…. and two to go. These are the segments I enjoy. Once we are on the plane… we are only 3-4 movies, half a book, magazines (thank-you SA public libraries), and a couple of meals before land again.

We’ve hit New York pretty hard and have not had much time to do posts recently (other than the occasional spontaneous post).

We’re now on Amtrak’s acela to Boston. America’s high speed train. Although at the moment in Connecticut it’s pretty leisurely.

We needed our pizza fix. We were told that Paulie Gee’s could fix all of that. There was a problem, however, the East River stood between us and pizza.

I had utilised my trusty tablet to find out there was indeed a water crossing with a connecting mid-town bus. On closer inspection of the timetable, however, it only ran peak hours Monday-Friday. Quite alright if you are in Australia, but we’re not… It was Sunday. Quick examination of Google Maps (how could Apple even think of releasing a map without public transport) showed that it took 17 minutes to walk to the ferry terminal or 15 minutes by public transport. With 20 minutes to go we legged it.

With only a little jogging we made the ferry with 30 seconds to spare. $4 not too bad for a few stops on the Ferry.

The East River Ferry was quite effective. It had an outdoor deck on the second level, although no seats. The service was fast and efficient.

Like the group of orthodox Jewish young men, we enjoyed taking photos from the deck.

Empire State amongst the skyline

It only took 10 minutes to cross the river to Greenpoint, Brooklyn

While the street was quite, save for a wedding party taking photos in front of a graffitied warehouse door – we presume that they had taken over the local pub for their reception, Paulie Gee’s was busy. We approached reception and placed our name on the list and waited on the seats outside.

That’s not quite fair. It wasn’t just a pizza. It was a bloody good pizza – there were so many to choose from. They were mostly American inventions – good ones at that. We had a Delboy. A good base, but not good as some (wink), top quality toppings. Local ommegang witte beer was fantastic, but what is with the slice of orange attached to my glass?

We surprised the waiter by only ordering one pizza and salad (our usual order). We were disappointed seeing how many people didn’t finish these great pizzas, or left their crust behind (my god). Others were so full that they couldn’t fit in dessert. Boy, are they silly. The deserts were fab. H ordered a chocolate orange pot and I order a sundae with Mike’s hot honey (bloody hell it was spicy) and candied walnuts.

We had a great time there. There was something strangely déjà vu.

Well not a train, but two. The G and then the 7 back to Grand Central.

We’ve had a morning of fun with visiting the Centre Pompidou, another patisserie, and a last bike ride. Ah… We will upload the photos later.

Currently sitting in the airport lounge in Charles de Gaulle, after clearing customs and bag check (ahhhh). I will say it was eventful (I must be getting desperate for entertinment). Someone left a bag in the middle of an entrance. Officials cleared half the checkin terminal in 2E. This is fine however, we were in the middle of a bag re-pack. Yes, I did say bag re-pack, as Kym’s bag weighed 26kg and mine weighed 22kg. The allowed luggage is 24kg per bag… this resulted in me sitting on the floor reorganizing my case. I hurried up, re-packed, and we moved away from the area along with everyone else. We noticed a sudden rush of people back to the check-in area – so we joined. Announcements…. what are such things?!

Back at check-in, luggage reweighed Kym’s weighed 22kg, and mine weighed 22kg, with additional items acceded. How this is possible, I have no idea, but the luggage was accepted. Hooray!

Normally when we travel, we don’t have access to lounges (yeah premium economy!), but we have on this occasion. I will say, so far the lounge we experienced in Japan wins hands down, followed closely by Qantas in Sydney. This one is a very poor cousin, food is ok if a packet of chips, vegetarian slice, wine, or coffee is what you need. I don’t need any of those, but I did eat a packet of chips. I don’t know what possessed me…. Must be the thought of the flight. Next post will be from the otherwise of the pond!