While staying in BA we caught a couple of taxis because they were so cheap, and convenient. The drivers are pretty aware of the roads. They create lanes where perhaps you thought there was only one, and get a little close to other cars at speed.. Seat belts don’t seem to be compulsory, as sometimes they work, and sometimes they are stuck so you can’t access them. All up the experiences were pretty good.

Over the years we’ve had some interesting taxi rides. Yesterday’s ride from the hotel in BA to the airport for our flight to Córdoba has to take the ultimate prize.

Once the car started the driver took off at speed and then immediately took the right corner, then the next right. Resulting in me sliding me over in the seat and gripping the door handle. There wasn’t a lot else to hang on to as the seat belts were stuck under the seat. The roads around our hotel in Palermo were grid based, and one way. The driver entered the upcoming intersection immediately after a car crossed in front of us, and narrowly missed the next car going through the intersection. This experience continued through each intersection until the main road. On the plus side, the brakes weren’t heavily applied, so at least he judged each intersection and we weren’t being lurched forward at each stop.

While the main roads did feature lanes, the driver was quite creative. He pushed the taxi through incredibly small spaces between the lanes, where you could probably wind down your window and shake hands with the person in the next car). But remember this driving is occurring at speed, with tailgating. It really was like being in one of the car chases you see in movies…. Just this time we were in the actual car.

We knew the airport was quite close to the city, so as we were weaving in and out of the traffic we knew the end was in sight. There was a short opportunity on the expressway for the driver to go even faster pass a couple of cars on the left (they drive on the right here) then slow down create another lane as he took the expressway circular ramp off to the airport. By now we were on the road at the airport, the traffic lights ahead were red, with four lanes of stopped traffic – he kept going and took a right into a carpark. I thought he might be parking. He drove straight through the car park at speed passing the cars waiting patiently at the traffic lights, then back onto the road in front of the traffic and put his foot down to speed up to the next traffic stop. He followed the traffic as it curved round to the left in front of the airport, wove in between a few cars before coming to a stop outside the drop off zone.

We quickly got out grabbed our bags, paid the driver 80 pesos and walked into the airport. We passed a couple who were going to take the taxi we had emerged from, and in my mind I wished them good luck.

Thankfully the plane journey was uneventful! 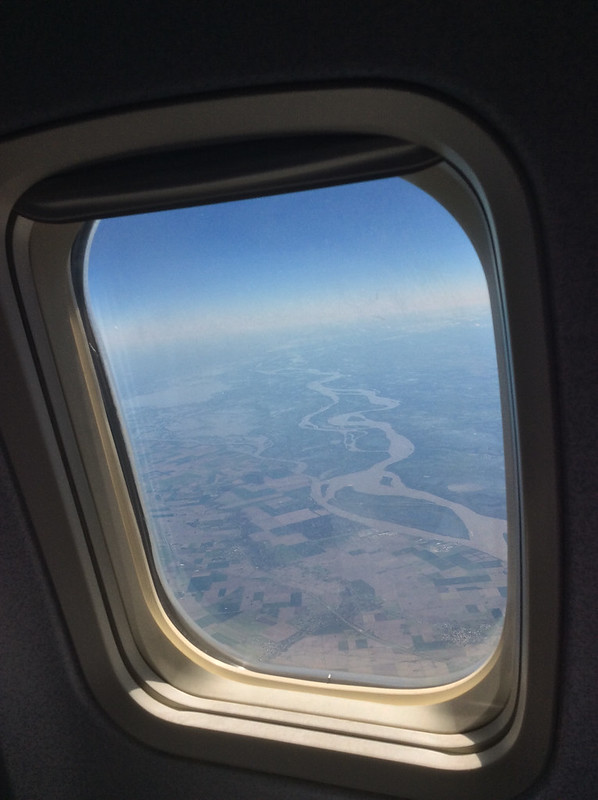