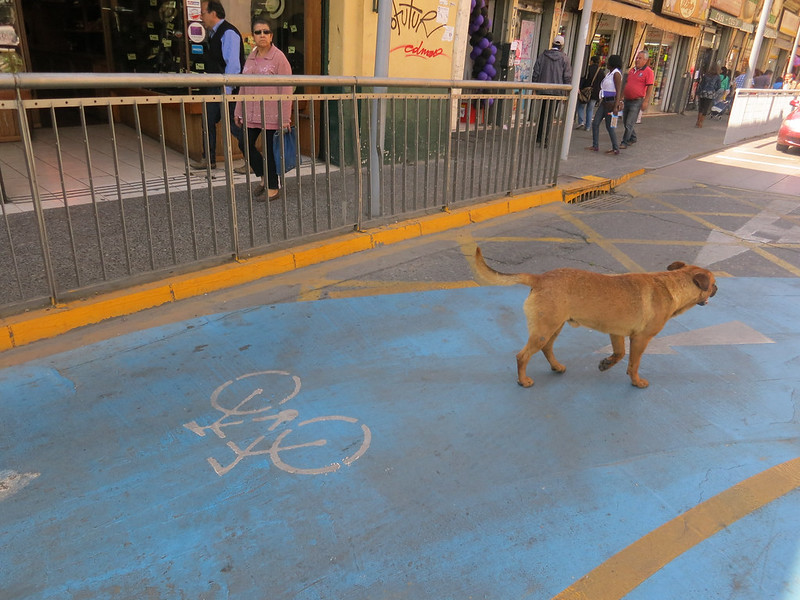 There are a lot of dogs in Chile. You can see them everywhere. On the street, in the parks, hanging around street shops, and running around with each other. This includes Easter Island.

So… Who owns these dogs? Well, in short no-one, and everyone. I can hear the dog fans up in arms. But it’s true. In parks and on some streets there are dog houses built by the locals for the dogs. People from the neighbourhood will come and feed them either at the dog houses (we did see this) or on the street. As you dog lovers can appreciate its hard to reject the eyes of a dog who is staring at you while eating.

The bike tour we went on in Santiago had a dog follow us for the majority of the journey… and a few days later we noticed the same dog outside the building where the tours commenced. Our guide was very surprised dogs had to be registered in Australia.

I will admit there are some dogs which look better than others. But it is probably the toughest which survive.

This may depress some of you, given the lack of care, but not being a dog fan myself the dogs here are really quiet and seldom bark. Which is a good thing given the number! This makes us wonder, do the dogs bark at home more because they have no interaction with other humans or dogs while we are out at work, and crave attention when the owners come home? Have we created barking dogs ourselves? Oh, that’s a little too deep for holiday thinking, must be time for dinner!